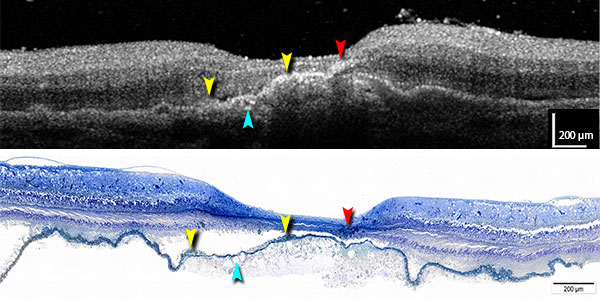 (Left) A comparison of optical coherence tomography (OCT) and histology on the same eye allows Project MACULA users to identify the cells on a microscope image (bottom) that are responsible for the hyper-reflective spots seen in the OCT (top, red, yellow), plus examine the contents of drusen, AMD’s specific lesion (teal). “From this kind of analysis, we’ve learned that the retinal pigment epithelium is highly migratory in AMD,” Curcio said. “Finding out what these cells are doing is now a research priority, and with OCT, they can be observed in living people.”

Over the past 14 years, Christine A. Curcio, Ph.D. (pictured at right), a professor in the UAB School of Medicine’s Department of Ophthalmology, has collected images from hundreds of donor eyes in her search for the basic mechanisms underlying age-related macular degeneration. AMD is the leading cause of severe vision loss and legal blindness in Americans age 60 or older, affecting up to 15 million people in the United States today and almost 200 million people worldwide by 2020. As the population ages, those numbers will only increase. AMD occurs when the central portion of the retina, known as the macula, deteriorates. But the exact cause is unknown, and new treatments are desperately needed.

A few years ago, Curcio realized that the images and tissues she had collected, if properly annotated, classified, and made widely available, could prove invaluable to researchers and clinicians alike. It wasn’t as easy as uploading the photos to Facebook. The process took four years, and along the way, Curcio and her team, particularly research associate Jeffrey Messinger, DC, had to develop new naming systems to achieve the level of precision they were after. But the result, an open-access website known as Project MACULA (Maculopathy Unveiled by Laminar Analysis), has been a resounding success, leading to several notable discoveries that have advanced understanding of the disease.

At the close of the 2000s, a high-powered new technology called optical coherence tomography (OCT) was becoming widely available to practicing ophthalmologists. It can provide detailed cross-sectional views of all the layers of the retina and the blood vessels behind it. OCT was so powerful, Curcio said, that clinicians “were now able to see the same structures” as basic researchers with their tissue samples. Curcio recognized that high-quality, accurately annotated lab images of eyes with and without AMD could serve as an invaluable roadmap — helping clinicians interpret the patient images they were seeing with the new machines. “AMD is a degenerative disease that is laid out in delicate tissue layers, and if you know the microscopic histology, it is possible to see almost all of it in OCT,” Curcio said. Connecting the microscopic world with patient images from the clinic can lead to “better diagnoses, more efficient clinical trials for new treatments and eventually better experimental model systems to test new ideas,” she added.

With seed money from philanthropic foundations, and a subsequent grant from the National Eye Institute, Curcio started Project MACULA. Her team catalogued 142 donor eyes: 82 with AMD and 60 controls. Each was tagged with critical information — such as exact measurements of the thickness of each tissue layer, along with a glossary and references — and both laboratory and OCT images. The site officially launched in 2013.

In the process of systematically reviewing the histology, Curcio’s team made major discoveries about the pathology of AMD — including a natural history of the principal lesions associated with the disease, known as drusen; the first major description of a new, drusen-like lesion, and the first comprehensive description of the neurodegeneration of AMD involving photoreceptors and the retinal pigment epithelium, which supports the photoreceptors. These findings have led to numerous peer-reviewed journal articles and invitations to major clinical meetings. “Leading ophthalmologists want this information to develop guidelines for trials,” for example, Curcio explains. “This is putting the right tools into the hands of the right workforce.”

“Having the histologic images available has helped me in interpretations and integration of multimodal imaging in the clinic,” agreed Richard Spaide, M.D., a renowned specialist in the diagnosis and treatment of retinal diseases who practices at Vitreous-Retina-Macula Consultants of New York. He has collaborated with Curcio on Project MACULA since 2009, co-authoring several well-cited papers that link clinical presentation on OCT with anatomical features seen in histologic images. “As with anything in science, there is plenty we don’t know,” Spaide said. “So when a subtle finding is recognized in an imaging modality in the clinic, it is helpful to go back to the known histology to put the new finding into some kind of perspective.”

Project MACULA has also had the desired effect of fostering important collaborations to advance knowledge about AMD, with the ultimate goal of developing new treatments and cures, Curcio said.

For example, Curcio and collaborator Dwight Stambolian, M.D., Ph.D., associate professor of ophthalmology and genetics at the University of Pennsylvania, recently submitted a funding request to add genetics to the equation. They propose obtaining a new set of donor eyes and uploading one eye from each pair to Project MACULA and sending the other to Stambolian’s team for comprehensive and robotic sequencing of RNA. Since AMD is a bilateral disease, affecting both eyes, this would create links in understanding of AMD from genetic variation to cells to clinical presentation.

“Connecting changes on the cellular level with changes in gene expression will hopefully allow us to develop new targets for new drug therapies,” said Curcio. “Since Project MACULA also links those changes with clinical images, it will also show physicians how these changes are presenting in the patient so they know when to start treatment, or in some cases, what does not need to be treated.” This information advances the goal of personalized medicine for individual patients, Curcio adds.

TISSUE, TECHNOLOGY AND OTHER SUPPORT 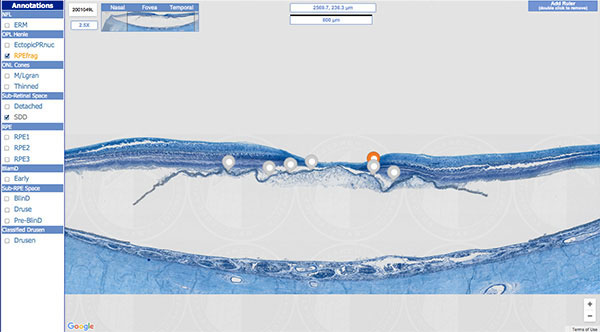 The project would not have been possible without several key partners, Curcio points out. “High-quality tissue made discoveries possible at Project MACULA,” she said. “Very few people are blessed with a resource like the Alabama Eye Bank, a highly productive eye bank that is able to obtain lots of tissue rapidly and thus meet our research needs.” Another invaluable contributor was the UAB Department of Computer and Information Sciences. Associate Professor Kenneth R. Sloan, Ph.D., his students and CIS staff provided the expertise and resources to create and host the Project MACULA site, Curcio notes.

The project also owes much to private funding partners such as the Birmingham-based International Retinal Research Foundation (IRRF), Curcio adds. Initial awards from the IRRF and the Edward N. & Della L. Thome Memorial Foundation allowed Curcio to purchase a large number of donor eyes from the Alabama Eye Bank, which formed the nucleus of Project MACULA. Another IRRF award supported the collection of pilot data that Curcio used to secure a large grant from the National Eye Institute, which funded Project MACULA’s creation.

“It isn’t possible to obtain large federal grants without first collecting pilot data,” said Curcio. “Without the funding support of IRRF during the early stages, Project MACULA would have never gotten off the ground.”

“We saw Project MACULA as an extraordinary opportunity to expand AMD histopathology in hopes of translation to better clinical interpretations of this degenerative disease,” said Sandra Blackwood, executive director of the IRRF. “This resource is serving as a valuable catalyst to both bench and clinical science.”

This article was originally published on the UAB MIX RESEARCH BLOG

Synthesis and Biological Evaluation of Novel Homoisoflavonoids for Retinal Neovascularization

Astrocyte structural reactivity and plasticity in models of retinal detachment