In the medical and scientific world, Charles D. Kelman, MD was known as “the father of phacoemulsification,” inventor extraordinaire, and a visionary pioneer whose technological ideas propelled the practice of ophthalmology into the realm of precision surgery. A 20th century Renaissance man, Dr. Kelman approached his varied interests with equal exuberance. A talented musician, he played the saxophone in concert with Dizzy Gillespie and performed at Carnegie Hall. He wrote a musical and had an album released by Columbia Records, and even produced Broadway musicals. An accomplished pilot, Kelman often flew his helicopter to the Lydia E. Hall Hospital in Freeport, New York from his Long Island Home.

In 1962, Kelman invented the cryoprobe, an instrument that freezes cataracts before removal, making cataract extraction a less traumatic task. Eight years later, his forward-thinking style enabled him to make the ophthalmic discovery of the century while sitting in a dentist’s chair. As a dental probe pulsates through the hard surface of tooth enamel, he reasoned, ultrasound vibrations could be used to break up a clouded lens. Phacoemulsification, as the technique is called, was the first of the minimally invasive techniques, and the stimulus for small incision surgery, including gall bladder, lumpectomy, vertebral disc surgery and other surgical applications. 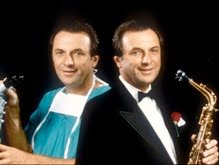 Dr. Kelman was a co-founder of the International Retinal Research Foundation, along with longtime friend and colleague, Alston Callahan, MD, and served as its Vice President from 1997 until his death on June 1, 2004. The Directors of the IRRF acknowledge their gratitude to Charles Kelman for his generosity of spirit, his innovations in science, and his steadfast commitment to the betterment of mankind. We lost not only an icon in the medical and scientific world, but a valuable partner.